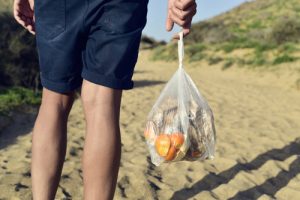 Do you have fruit and vegetable scraps, coffee grounds, clippings of grass from mowing? Compost it this summer. All you need is a 5-gallon bucket.

A community compost program started by Solid Waste Services, the city-owned trash utility, is in its 3rd year and growing fast. There are 2 drop-off sites: The Central Transfer Station on East 45th Avenue in Midtown and the Anchorage Landfill in Eagle River.

In 2017, the utility distributed specially marked compost buckets to about 1,000 customers. But this year, it’s open to any Anchorage resident with a 5-gallon bucket, said Suzanna Caldwell, recycling coordinator for Solid Waste Services.

The utility will also experiment this summer with curbside compost collection for its customers.

To compost, fill the bucket with:

The banned items, like fish and meat, aren’t allowed because they don’t break down as well, Caldwell said. An overly contaminated load will end up being thrown out. She said people did a good job of keeping to the guidelines in the first two years of the program.

After a drop-off, American Landscaping, an Anchorage compost and plant nursery, takes what’s in the buckets and turns it into compost. Finished compost will be available at both drop-off sites for anyone who wants it, Caldwell said.

The program is available at this moment and will continue until October. Caldwell said the utility wants to make the program year-round.

The expanded curbside program will start in early July, Caldwell said. Sign-ups will be available through the Solid Waste Services website or on the utility’s Facebook page.

The utility serves about 20 percent of the city, covering downtown and surrounding neighborhoods. The company that serves the rest of the city, Alaska Waste, isn’t planning a similar program, said Kurt Froening, the assistant district manager.

Car Auctions and You: A Beginner’s Guide to Snagging Your Dream Car