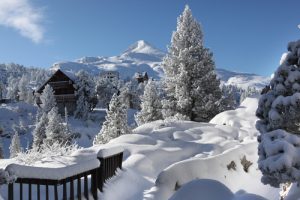 Through the end of the year, Alaska faces extreme cold temperatures not expected to relent until January’s first weekend. The frigid weather contrasts the fact 2019 stands as Alaska’s warmest year on record.

Across the state, cities brace against the freezing blast. Fairbanks has a December average low of -13 degrees Fahrenheit. However, the city hasn’t risen about zero degrees since last Wednesday, and Sunday night dropped to -30. Nome’s lows for yesterday and today hover around -20. South of the Denali range, cities face colder temps, as well. Anchorage forecast shows a temperature of zero with lows around -10 through the weekend.

In spite of the year-end blast of cold weather, however, Alaska closes 2019 as the hottest year on record.

These exceptional cold temperatures aren’t unprecedented for the state. For example, through the 40s and 50s, the city of Fairbanks saw twice as many days in this temperature range as it has in recent years. Similar drops in the number of extremely cold days are observed by the records of Utqiagvik and Bettles, among others. Anchorage recorded 12 nights in the years between 1952 and 2000 that failed to drop beneath -60. 9 have been recorded for this year alone.

The warming climate impacts Alaska at a rate twice that of the rest of the world. Arctic sea ice shrunk its average coverage over the preceding 40 years by two thirds. Over the last 50, the North Slope rose close to 6 degrees. Scientists name climate change as the culprit. In an otherwise unaffected climate absent human intervention, cold and warm swings balance. Instead, Alaska regularly breaks heating records. This cold spell isn’t expected to challenge prior standing records.

Cold forecasts aside, Alaska is heating up.