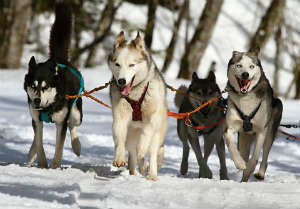 It’s that time again! This weekend, a large crowd got together as the 47th Iditarod Trail Sled Dog Race kicked off. It began on Saturday with a ceremonial sprint in Anchorage. A whopping 52 musher-dog teams prepared for the 1,000-mile race. And the dogs were excited. Many of them barked incessantly before taking off on the 11-mile sprint on Saturday.

The more difficult aspects of the race began on Sunday. This takes place in the smaller community, Willow, which is a bit north of Anchorage. Then, the teams, made up of 14 dogs, plan to cross over two mountain ranges. Then, they cross the frozen Yukon River and sea ice along the Bering Sea Coast. Throughout the trail, village checkpoints are set up for the teams. The end brings them to the old Gold Rush town, Nome, on the western coast of Alaska.

How long will it take for this journey? Well, they expect that the winner will arrive in Nome in about nine days. And the top prize for that winner? Likely close to $50,000! And with the rest of the prizes for the other placeholders, the total purse adds up to about $500,000.

What will happen this year?

Everyone is eager to see who will take the top spots this year! Will it be Joar Leifseth Ulsom, the winner of last year’s race? Or perhaps Nicolas Petit, from Girdwood? Last year, he accidentally went off course and then had to backtrack. Several other great mushers are in the running as well.

And while most spectators eagerly await the results and enjoy watching the kick-off on Saturday, there was a bit of controversy with the event. A protest by the People for the Ethical Treatment of Animals (PETA), who have criticized the race for years, occurred this weekend.

They claim that over 150 dogs have died due to this race. However, race officials say that this is untrue – but they haven’t said how many dogs have died from the event. Therefore, it is unclear what dangers the dogs might face.

Soon, we’ll know the outcome of the race and the fate of dogs and mushers! What do you think about the Iditarod Trail Sled dog race? Who will take home the title this year?