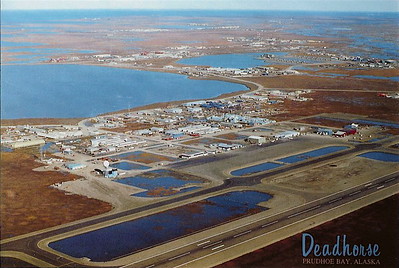 Deadhorse is one of the most northernmost towns in Alaska. As well as the world. It was developed in order to transport oil for the Deadhorse Oil Company back in the ’70s. The original town resides along the Alaskan pipeline. Until recently, the only way to get to the town (if you can even call it one) was by plane.

Dalton Highway: The Only Way To Deadhorse

Plans began on the Dalton Highway. A strip of 415 miles that connects the town of Fairbanks to Deadhorse. The road isn’t paved and consists of mostly gravel. This is in part to the yearly permafrost, where the ground softens after the long winter and can create fissures. Having a paved road requires constant maintenance, unfortunately, there aren’t enough people in the area to cover 415 miles or road.

Truckers can make almost $250,000 a year by driving this road. Even for the limited cargo they have, it supplies the town, and its the only way (besides planes) to do it. Unfortunately, it acts as a compensation for the dangerous conditions. Even in the summer, the roads are barely visible due to baren conditions. The winter brings more troublesome terms with white-out conditions. Still, citizens of the area need goods and services brought to them and there are many who professionally brave the treck in big rigs.

The conditions range from sturdy gravel roads to ice treated death traps. Braving the roads, no matter what time of year will present almost non-visible conditions, debris, fissures, as well as many other dangers. For every mile, you can see the graveyard of a past explorers old, rusted truck left on the side. If you were to explore the route on your own, (hopefully you bring an SUV) be ready to see the rare trucker or service worker on the road. Other than that, it’s just you and the wilderness, so hopefully you don’t get stuck .