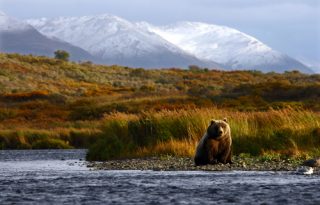 Apparently, at the Interior Department, people think that unsporting and unethical hunting practices, which includes killing hibernating black bear mothers and cubs in their dens; killing wolf or coyote mothers, pups or even entire packs at their den sites; killing caribou while they’re swimming; and hunting black bears with packs of dogs — are perfectly fine to allow on Alaska’s National Park Service lands. But what about what most Alaskans say, and they think they aren’t fine.

These practices are an insult to most Alaskans’ values, according to a June 2018 poll.

The Park Service rightfully stepped in and ended the Alaska Board of Game’s unreasonable priority for hunting, in 2015 and predator control over wildlife conservation on Park Service lands in Alaska. Also, those practices have been widely condemned as unscientific and too costly.

Despite the rhetoric coming from our congressional delegation and outside trophy hunting groups, the NPS’s 2015 final rule does not ban subsistence hunting, it simply addresses these few egregious hunting practices that unnecessarily target Alaska’s iconic and highly valued native carnivores. Alaska’s predator control program is unscientific, unnecessary, ineffective and unethical. It has no place in our modern relationship with wild lands and wildlife.

The 2015 NPS rule was widely accepted by Alaskans. After sometimes, the Park Service obtained public input across Alaska, holding 26 public hearings and meetings in Alaska, teleconferences with state of Alaska officials and meetings with villagers. The Park Service received 70,000 public comments overwhelmingly favoring the strict protections for wildlife in the 2015 rule. This was not a federal agency exerting its (albeit rightful) authority over national park lands in Alaska — this was the NPS following science, ethics, congressional law and the wishes of most Alaskans.

Living in Alaska, one of the 1st things one learns is to always respect wildlife. We value wildlife, not cruel and unsporting hunting practices. And the rest of the country and the world value our wildlife too: A 2014 study reported that wildlife viewing in Alaska contributes more than $2.7 billion to our local economies each year, more than twice what hunting contributes. According to the Park Service: “In 2017, 2.8 million park visitors spent an estimated $1.3 billion in local gateway regions while visiting NPS lands in Alaska. These expenditures supported a total of 18.9 thousand jobs, $618 million in labor income, $1.1 billion in value added, and $1.9 billion in economic output in the Alaska economy.”

Despite this enormous economic benefit, the Department of Interior is now suggesting a regulatory rule that would overturn the 2015 NPS prohibition on these predator-control practices on national park preserves, even as the state’s Intensive Management program has proved to be an utter failure. Studies show wanton and wildly expensive native carnivore killing hasn’t benefited game species at all in Alaska. But out-of-state trophy hunters want it, so the state continues the outdated program. Wild ungulate populations are generally more limited by weather and the fragile Arctic ecosystem’s carrying capacity.

Living so close to such wild splendor is something we all cherish living in this state, and most of our fellow Alaskans feel the same way. The future of our majestic wildlife depends on it.

Electric Vehicles: How They Can Weather The Storm Of Wintertime