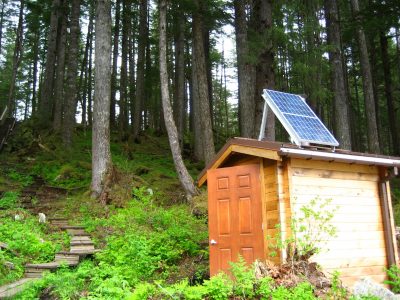 Utilizing alternative energy in the great north can be difficult. Alaska will always have some of the harshest and toughest living conditions in the world. The seasons are short, cold weather can stall the heartiest of engines and having enough power to move through terrain can be difficult.

Biofuel is one of the most effective alternative sources of energy in the world. With many midwestern farmers utilizing soy, peanut, and various vegetable byproduct to manufacture fuel has become an industry all on its own. Unfortunately, this isn’t as easy to come by as Alaskans need every bit of energy they can get.

Traditional biofuels (although mixed with diesel oil) do not produce the same amount of energy. A vehicle utilizing these methods will find an 8-10% decrease inefficiency. That can cause problems when traveling long stretches of barren tundra with limited fuel supplies along the way.

In colder weather conditions, biodiesel can work to gunk up an engine. With the viscosity way higher than that of diesel oil, the chances of plugging fuel lines ais far greater. On top of that, a break in the fuel line due to increased pressure could mean that you are stuck in the middle of nowhere with no way to get gas other than to walk. WIth wolves, and some of the worst temperatures on the planet, walking never seems like a good idea.

Solar energy has become one of the most widely recognized and popular form of alternative energy. Its uses have helped propel electric vehicles to the world. From houses to cars, every way we live can be produced by renewable energy from the sun. Unfortunately, our solar systems’ most abundant resource, The Sun, only appears for limited months out of the year in Alaska. Where solar panels can only store the amount of energy for batteries, in order to maintain alternative energy would be to charge an extremely high amount of batteries.

It’s a great idea to have backup power to your house based on electricity though. With the charging of batteries, you can stock up on the amount of energy you can save. Let’s say you are stuck within the 30 days of unending night and you lost power. BOOM Now you have a source of energy to take your showers, cook your food and maybe some entertainment. Perfect. You can all of this without stalling whatever generator you may have.

Alaska’s primary export is crude oil. Obviously this doesn’t quite coincide with effective biofuels or solar energy. The main reason for Alaska’s population was on behalf of two big historical rushes. The first being Gold. The second being oil.

The state’s major economy is based on oil. Overall it looks like Alaska will be one of the last places to see the alternative revolution. This isn’t to say that they aren’t making huge strides. The community has acted on behalf of solar energy and biofuels by incorporating it into their daily lives. From solar panels on a house to utilizing them with our other options, countless Alaskans are switching to alternative fuels in order to cut down on costs and better their lives.

Audi E-Tron GT has Considerable Room for Your Bags