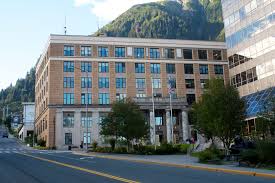 In a speech to the Alaska Chamber and Greater Juneau Chamber of Commerce, Governor Mike Dunleavy emphasized Alaska’s natural resources as a means to boost its economy.

In a state with a growing deficit, lawmakers’ budget concerns loom over all others. Dunleavy wants to capitalize on state resources as a means to expand development. For example, Alaska features rare minerals companies seek for use in various electronic devices.

“And I think these rare earths, these minerals, graphite finds, etc., are going to be coming into play sooner than we think,” said Dunleavy.

Additionally, he touted the state’s proximity to the Arctic as being potentially advantageous. Studies show warming in the region beginning to open new waterways. Policy experts predict a skyrocketing strategic value to the arctic as it opens up to both trade and military operations.

Additionally, the governor addressed a proposal to build a rail link through the state. It would allow oil from Alberta to reach the Pacific Ocean for transport.

However, none of these offer solutions to the state’s growing deficit.

Within the first two weeks of the new session, Dunleavy met with the Alaska Legislature to review his proposed budget. It leaves a $1.55 billion deficit many state lawmakers oppose.

Lyman Hoffman, a Democratic senator from Bethel, complained of the governor shying away from collaboration. “Instead of working with us and finding solutions, you’re saying that we will not look at additional revenue from the industry, which is a large amount, which is going into a fight with one hand tied behind our backs,” he said.

Another Democratic senator, Bill Wielechowski of Anchorage, supports rolling back various credits given to the oil and gas companies in the state. It would increase the tax revenue coming in from Alaska’s biggest industry. Nearly 85 percent of the state’s budget comes from industry revenue.

Having abandoned the more aggressive cuts from his last proposal, lawmakers still express concern over the governor’s new budget and its inability to address the state’s deficit.