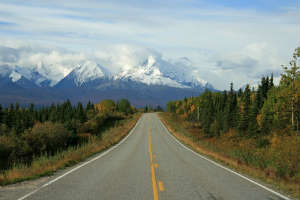 Last year, sixteen drivers from the company Carbon Express Inc., tackled a special delivery project. They transported petroleum-based drilling fluids from Illinois and Texas to Alaska in a cross-country trip. And apparently, the journey was an incredible experience for the truckers. Unfamiliar with the beautiful Alaskan scenery and stretches of daylight in the summer, the truckers were mesmerized with what we consider day-to-day life here.

While the product was not unfamiliar to the company, since they have done oilfield hauling for over 10 years, it was longest delivery of its kind that they ever completed. The trip was over 4,000 miles long. Apparently, it included a total of eighteen days of travel. And, their company is based out of states on the East Coast of the US, so the travel time was extensive.

But, throughout that travel, the crew got to see long stretches of amazing views. The team consisted of thirteen company drivers, along with three owner operators. The truck driving experience of the group ranged from one year to forty-five years.

The Trip of a Lifetime

One of the drivers was Bill McNamee, who has been driving for over 25 years. He’s also been working for Carbon Express since 2012. He stated about the project: “I wish I could have started with tanks at the beginning of my truck driving career. At Carbon Express, I run primarily in the west from Indiana to California. Typically, I stay out a month at a time.”

And, their route to Alaska went through northwestern Canada. In addition, it included the Alaska Highway (previously known as the Alcan Highway). The drivers were impressed with the improvements to the road since they last saw it. Apparently, after much construction in the last twenty years, it is a lot smoother.

According to McNamee: “We saw incredible sights, including an abundance of wildlife. We saw bison herds wandering along the side of the road. We saw bears, dall sheep, and caribou. Sometimes, the biggest challenge was avoiding tourists who wanted photos of the wildlife.”

The crew pulled in to their Alaska destination seven days after the start of the trip, where the president and founder of the company awaited them. As a reward for successfully completing the trip, he gave them a long weekend with a stay at a hotel, complete with log cabins. It is safe to say that the team will remember their long journey to Alaska for the rest of their trucking careers.