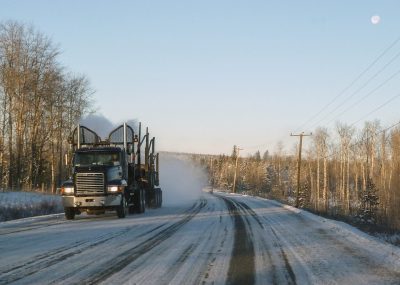 Ice Trucking has only come into the spotlight pretty recently. This has been, in part, thanks to a couple of popular TV shows. For example, Ice Road Truckers which focuses on the everyday life and experiences of several Ice Truckers.
But, what do you really know about Ice Trucking?
Since this job has been around since the beginning of the Trucking Industry, we have decided to gather some more information on the subject. And we have found pretty interesting data!
So, go ahead and immerse yourself in the icy road ahead!

During the colder months of the year, the northern states and countries can feel isolated from the rest of the world. However, they still need to get supplies to endure the winter.
This is where the Ice Road Truckers come in and save the day!
This job, although unknown is very much needed. And, if you happen to live in a cold place, you probably owe them so much, from your fresh food to your Amazon packages.
They are the hidden, unspoken of, courageous souls that keep the cold places running all year-round.

IT IS VERY DANGEROUS

If you have ever tried to drive on an icy road, you maybe can begin to understand what it might be like for Ice Truckers. They have to drive every day on several inches of ice with their heavy loads behind.
But what if we told you that many times they don’t even drive on roads? More often than not, Ice Truckers drive on frozen lakes, rivers or even swamps. Sometimes, these are the only routes to get to their destination.
Now, the tricky part!
The ice can only hold the weight of a truck while on movement. This means no stopping the truck and being always on the move. Ice can only hold about 60,000 pounds. Otherwise, it caves leading to fatal consequences.
Many truckers have reported hearing the ice crack as they drive by. Spooky!

IT IS REALLY, REALLY COLD

You might think this comes as a given, but extreme cold can be a real, unknown hazard.
In the northern parts of Canada, temperatures can drop between -50 and -60 Fahrenheit degrees on a daily basis during the winter months.
If we also take wind-chill into consideration the temperature feeling can drop all the way down to -95 F.
These temperatures might be unheard of and even unimaginable for those who live in warmer climates. But these truckers face them in their jobs every day. And they put them at risk for hypothermia while on the road.
As if the cold wasn’t enough, it also brings snowstorms that can severely impair the vision of the driver. Or the snow might even provoke an avalanche.
Besides, really cold temperatures are also bad for machines and engines. Did you know that? This causes the trucks to be at risk of mechanical issues, which can be fatal depending on the conditions.

Although they are not abundant, if you manage to get a job as an Ice Road Trucker, you will get a fine paycheck.
That might be the reason why many things get flown nowadays. However, many things can’t be shipped in a plane and that is when trucks come into play.
Ice Road Truckers get paid an average of $60,000 per six weeks of work.
Usually, the rates go somewhere between $20,000 and $80,000 per season.
Meanwhile, the length of a season varies depending on the climate. They typically go from mid-January until mid-March. However, in some places, the season might last only a few weeks, while in other areas it can continue for several months.
As you can see, these Truckers get paid very well. It is the least since they are literally risking their lives on the job.

IT REQUIRES SOME QUALIFICATIONS

As you probably have noticed by now, Ice Trucking is dangerous. That is why drivers need to fulfill a series of requirements to be able to perform this kind of job.
First, you must remember that each company has different demands. However, most of them might ask for previous experience, special training or a perfect driving record.
Then, keep in mind that since many of the companies that hire Ice Road Truckers are Canadian, they tend to hire Canadian drivers. This is merely because it might be easier for a local to get a season permit to work.
Whoever, companies tend to notice where you have either lived or worked before. As an American, if you have previously worked in areas with extreme weather or blizzard conditions it will show as an advantage. For example, if you are used to the Montana, Wyoming or Colorado roads.
Finally, remember that the Ice Trucking community is pretty small. So, recommendations are usually an easy way to get hired!

Not everybody is cut for driving a huge truck on the ice. But, if you can see yourself doing it, here are some job listings to get you started. And here you can find a list with many Ice Road Trucking Companies.

What do you think about Ice Road Trucking? Do you have any experience with it? Let us know in the comments!

Audi E-Tron GT has Considerable Room for Your Bags