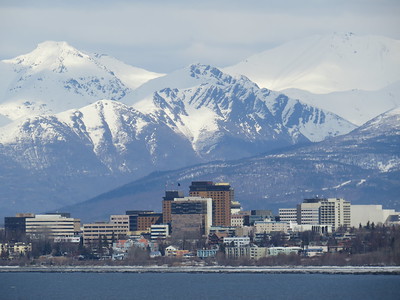 Photo by Luke Jones used under CC BY 2.0

As the impact of the novel coronavirus reaches across the globe and residents shelter in place, others work to protect the vulnerable homeless population without a home to shelter in.

In Anchorage, the effort to shield the homeless from the brunt of the outbreak sees the conversion of arenas into temporary housing. The new emergency shelter occupies Sullivan Arena and neighboring Ben Boeke Arena. At the corner of Seward Highway and East Seward Ave, the pair of arenas sit opposite one another across a parking lot shared by both.

Sullivan Arena converted into shelter for men. The Ben Boeke Arena turned into a shelter for women. The complex, consisting of both arenas, houses up to 480 homeless individuals.

As of Saturday evening, over 300 moved into the arenas. Within, each receives a tote for their personal belongings. They also sleep on mats spaced 6 feet apart, as according to CDC guidelines.

The emergency homeless shelters came together as a result of a collection of advocacy groups. Among them, workers from Bean’s Cafe and Covenant House greeted people as they arrived by bus to the complex.

In addition, private security companies were on site to conduct screening as individuals entered. They checked belongings for items not permitted within shelters, such as weapons.

After filing through security, emergency medical personnel screen each person for symptoms of COVID-19. While providing shelter, advocates remain vigilant so as not to infect those they intend to protect.

The homeless are considered especially vulnerable to the outbreak. Since they have inadequate access to housing, they generally lack the ability to maintain hygienic standards considered vital to the prevention of spread. Furthermore, since most public buildings like libraries closed during the outbreak, they don’t have those options for sanitation.

In addition to the arena complex, Brother Francis Shelter continues its regular operations, presently housing over a hundred.