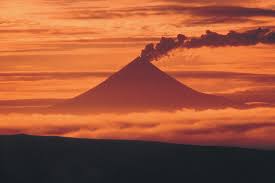 A volcano in Alaska finally erupted Sunday following a period of rumbling since the middle of last year. The plume of ash extended 5 miles into the sky.

The volcano, Shishaldin, rises higher than any other volcano across the state. It rises to 9,373 feet, making it the tallest mountain of the Aleutian chain. Shishaldin sits 680 miles southeast of Anchorage among the eastern Aleutians. That area features the most volcanic activity in all of Alaska. So, when the volcano began to rumble last year, it signaled an impending eruption.

Shishaldin’s upper two-thirds usually feature snow and ice, coating the spherical peak in white. However, the eruption disturbed its otherwise tranquil presence along the natural skyline.

When the volcano erupted, the ash shot as high as 28,000 feet above sea level, a feat observed by satellite imagery. Furthermore, the plume extended 90 miles. It drifted largely east, placing the ash over the Gulf of Alaska.

However, some ash reportedly sprinkled over a small village. False Pass, a tiny Aleutian community situated roughly 23 miles northeast of Shishaldin, observed flecks of ash in their air. The town’s year-round population of 40 expands during the summer months when visitors arrive to fish.

“Someone reported some ash on their windshield,” said David Fee, the coordinating scientist of the Alaska Volcano Observatory’s University of Alaska Fairbanks.

In addition to the ash plume, Shishaldin began oozing lava along its banks, tracing lines of red down its face. Since July, Shishaldin has been in an on and off phase, which means occasionally spewing ash and dribbling lava.