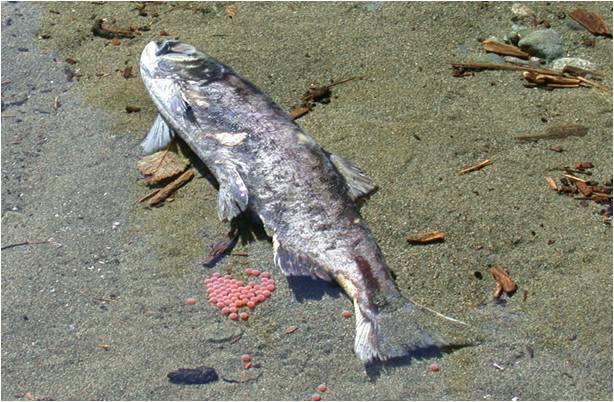 A Czech tourist, Ales Richter, was on vacation in Alaska, when he decided to kayak in the Tutka Bay Lagoon. Instead of being met with breathtaking views during his trip, Richter came across a horrifying scene of what appeared to be a salmon massacre or more specifically defined as a salmon death toll on the rise.

Furthermore, he posted a 13-second video clip on his Facebook page showing hundreds of dead fish in the lagoon. Where he captioned the video as, “the incredibly warm and sunny summer.” This led to believe viewers that the generally rising temperatures are the cause of global warming. Moreover, the temperature in Tutka rose to 23 degrees Celsius this year. Last year, recorded temperatures were just a mere 16 and 19 degrees Celsius.

However, according to local media, the salmon death toll rise were the result of an accident and not global warming.  “This unfortunate incident happened while we were fishing. Our net broke after it got snagged in the water and many salmons died from sock and lack of oxygen. We estimated that about 1,200 salmon died in the accident. Hence why many of their carcasses floated to the surface,” says Dean Day, the executive director of the Cook Inlet Aquaculture Association, which works on salmon conservation and operates a hatchery in Tutka Bay Lagoon.

In addition to this strange event, Alaskans have reported salmon death toll in their areas. Reports have come in different parts of the state. Female salmon have natural deaths in two months after spawning, however, many locals and researchers have found a few dead female salmon who were carrying healthy eggs.

In conclusion, a recent study carried by Dr. Stephanie Quinn-Davidson, who directs the Yukon River Inter-Tribal Fish Commission, stated, “All signs point to heat as the cause for this salmon die-off. We had about four to five days of extreme heat in Alaska. It is very likely the number of dead salmon are in the thousands. And quite possibly in the tens of thousands.”

So, what do you think? Is global warming the justification for the immense death toll of salmons?